Tens of thousands of horses, dogs and other animals have served Canada and the Canadian military during times of war and peace. You may or may not know some of them, including Winnie the Pooh. These animals were not only useful and a necessary tool of the war, they also brought joy and a much-needed reprieve from the dreary outlook of war for the soldiers. The various species that have been involved in wars range from cats & dogs to horses & pigeons.

In 2012 near the National War Memorial in Ottawa there was a monument erected to memorialize their sacrifices & service. Over 54 of these animals have been awarded the PDSA Dickin Medal, which was created by Maria Dicken in honour of the work animals provided in World War II. This medal has been referred to as the Victoria Cross for animals, the Victoria Cross being the highest and most prestigious award of the British honours system2.

Here is a short list of some of the most notable animals to have served or been associated with the Canadian military:

Simon4 – While on board the Amethyst, the tomcat kept the crew’s morale up and the rat population down. Party tricks included fishing ice cubes out of a jug of water, leaving dead rats as “gifts” in sailors’ beds, and sleeping in the captain’s hat. HMS Amethyst’s ship’s cat was awarded the Dickin Medal for “gallantry under fire” and for the disposal of many rats despite shrapnel injuries during his time on the ship2. Simon was added to the ship as a stray from Hong Kong. 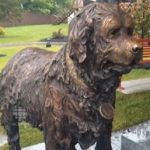 Gander1,3 — This Newfoundland dog was given to the Royal Rifles of Canada while they were stationed at Gander International Airport at the beginning of the Second World War. He travelled with the regiment to Hong Kong shortly before Japan attacked the British colony in December 1941. Gander attacked and chased off Japanese troops on at least two occasions during the battle before being killed while carrying an enemy grenade away from a group of wounded Canadian soldiers. He was posthumously awarded the Dickin Medal in 20002. 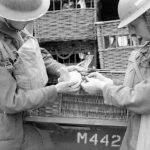 Beachcomber1,3 — A carrier pigeon who travelled with Canadian forces during the ill-fated raid on the French port of Dieppe in August 1942. Shortly after the battle started, Canadian soldiers released Beachcomber to relay the first news of their successful landing at Dieppe back to England. The pigeon is said to have accomplished his mission despite having to fly through an aerial dogfight and efforts by the Germans to down such birds and was awarded the Dickin Medal in 19442. The raid, however, was a disaster for the Canadians, with 907 killed and 1,946 captured. 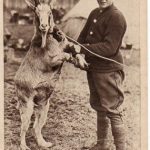 Sgt. Bill1 – Many military units have adopted animals as mascots, and the 5th Canadian Infantry Brigade was no exception when they took on a goat during the First World War. Sgt. Bill was no ordinary mascot, however. He saved three soldiers by headbutting them into a trench before a shell exploded and was gassed and wounded several times while living on the front lines in Europe. He marched in a parade in Germany after the war wearing his blue coat and sergeant’s stripes and his taxidermy are on now display in a museum in Broadview, Sask.

Bonfire1 — Many Canadians know of Lt.-Col. John McCrae, who captured the horrors and loss of war in his poem “In Flanders Fields” during the First World War. Few may know he took his horse Bonfire when he went to Europe with the Canadian military. McCrae would often write letters home to his nephews and nieces under Bonfire’s name and signed by a hoofprint and took the horse for long rides in the French countryside for a respite from the war. Bonfire led McCrae’s funeral procession after the latter died from pneumonia and meningitis in January 1918. 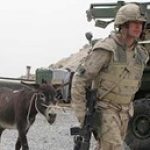 Hughes1 — Canadian military engineers purchased this pint-sized donkey from a group of Afghan National Army soldiers to help carry heavy equipment and supplies during Canada’s war in Afghanistan. But Hughes, who was named by his owners after a fellow soldier back home, quickly became more than just a pack animal thanks to his role in helping Canadian military engineers unwind in Kandahar after long days searching for improvised explosive devices. 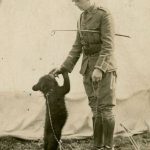 Winnie the Pooh1 — No list of famous animals associated with the Canadian military would be complete without a nod to everybody’s favourite bear. Purchased by Canadian veterinarian and soldier Harry Colebourn and named after his adopted hometown of Winnipeg, this black bear would cross the Atlantic to England with Canadian soldiers during the First World War. He never actually made it to the frontline’s and was instead donated to the London Zoo, where he caught the eye of A.A. Milne’s young son, Christopher Robin Milne. The rest, as they say, is history.